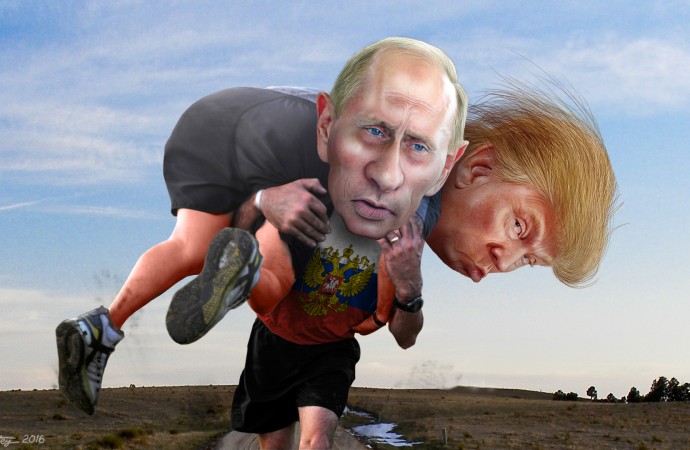 As a new year opens across the globe, the post-Second-World-War order and the global rule of law are losing out to the rule of individual men. From Russia to China to the EU, authoritarian rule is tightening its grip. In some of the most powerful countries in the world, these pillars of international affairs are

As a new year opens across the globe, the post-Second-World-War order and the global rule of law are losing out to the rule of individual men. From Russia to China to the EU, authoritarian rule is tightening its grip.

In some of the most powerful countries in the world, these pillars of international affairs are not only being overwhelmed by the whims of authoritarian leaders domestically, those same leaders are also undermining the international laws that form the foundation of post-war peace and security. The evidence can be found in daily headlines from around the world.

The trend is most evident in the actions of Russian President Vladimir Putin and his military, along with his Syrian, Iranian, and Shia Iraqi and Lebanese allies, who have been trampling the most sacred rules of war and committing the most horrific crimes against humanity against civilians in Syria. In his own country, Putin maintains the façade of a “managed” democracy by crushing all dissent, controlling the media, and using his security and intelligence forces to suppress — or murder — opposition voices. And his actions aren’t limited to the domestic; he’s undermine liberal democracies in Europe by aiding far-right and neo-fascist parties, not to mention his ultimate adventure — the seemingly successful manipulation of the 2016 US presidential election.

In China, the leadership is using its growing military and economic power to defy foundational rules of international law in the South and East China Seas, daring even the US to challenge its claims over one of the most important sea-lanes in the world — where $5 trillion worth of goods are transported annually. The Economist sums up how the Chinese leadership intends to ramp up its own crushing of internal dissent in an article entitled “China invents the digital totalitarian state.” The hundreds of lawyers and other pro-democracy activists who have either disappeared or are being held in secret jails seem to be just forerunners of what could happen to Chinese citizens in the coming years under the leadership of President Xi Jingping, as he seeks to assume all the major levers of power.

These authoritarian leaders are role models for middle-power politicians whose countries previously had willingly joined the community of liberal democracies. This is happening even within the European Union — which was established in part to promote liberal democracy in Europe in the wake of a global war triggered by the most brutal authoritarian regime in modern history. Leaders in EU member countries such as Hungary, and even Poland, are increasingly taking on authoritarian policies and laws; Hungarian Prime Minister Viktor Orban has gone so far as to express a wish to end liberal democracy in his country. The newly elected Polish government follows the Russian model of limiting the independence of the media and undermining the independence of the judiciary — and, like Oban’s government, is stoking fear of refugees and immigrants.

Right-wing parties that espouse authoritarian and racist policies in France, the Netherlands, and Austria are now governments-in-waiting, poised to spread a dark cloud over the post-war European order. After a populist backlash against the EU and immigration led the UK to vote for Brexit, that dark cloud seemed to spread to the office once assumed to lead the free world — the presidency of the United States.

Seemingly democratic elections have also given rise to increasingly authoritarian governments in the Middle East and Asia. The government of Turkish President Recep Tayyip Erdogan has, in the wake of last July’s coup attempt, detained or arrested more than 40,000 journalists, academics, judges, police, and military officials on alleged coup-related charges. Tens of thousands of others from all walks of society have lost their jobs, while private property has been seized without due process. In the Philippines, President Rodrigo Duterte has advocated the extra-judicial killing of thousands of alleged drug traffickers and has admitted killing some of them himself. After being rebuked by the US for what may amount to abetting a crime against humanity, he has turned away from Western allies and is moving towards China’s sphere of influence.

How can the remaining fortresses of international liberalism — like Canada, Germany, the Scandinavian countries, the Baltic States threatened by Russia, and progressive forces in the US buoyed by winning the popular vote in the 2016 election — even begin to fight against this tide of darkness? First, they must use all their powers of political, economic, and social persuasion to shine a bright light on the “post-truth” fabrications fuelling the new authoritarianism — the terror, corruption, and fraud perpetrated by this new generation of strongmen, perhaps by focusing on its undisputed leader: President Putin.

Second, they must examine their own glasshouses to see how the so-called Washington Consensus liberal order has produced too many losers, too many corporate robber barons, while creating a level of social inequality, job loss, and poverty that begs the title “neo-feudal.”

Finally, to draw back the millions who may have wandered over to the authoritarian camp, progressive leaders, parties, and governments must use the human rights agenda to promote the lives and interests of all. Martin Luther King put it best: “Justice denied anywhere diminishes justice everywhere.”

This article was originally published on iPolitics on Thursday, January 12, 2017.

Join us on November 1st @ 1pm for the inaugural Global Ideas Lecture! 💡

@M_Ignatieff will be speaking on academic freedom, free speech and thinking for yourself.

CIPS member Pascale Massot co-edited a special issue of @CompChange with @jgruin. Titled 'Conceptualizing contemporary markets', this special issue is the result of a workshop at CIPS in October 2018. Check it out 👇

IPEN is back with an exciting Roundtable Series!