How Do You Make Donald Trump Laugh? Democrats Should Think About It. 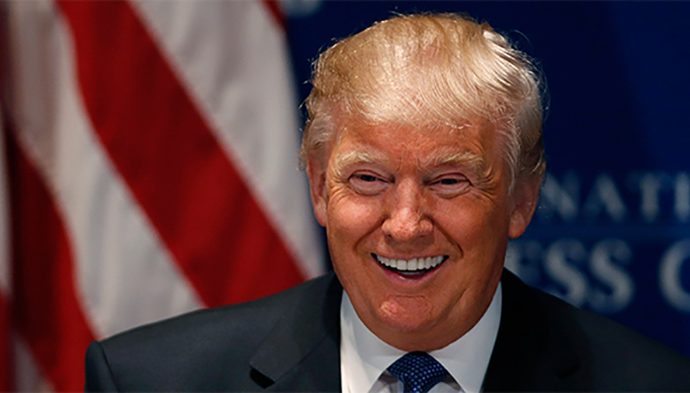 What would make Trump laugh? Nancy Pelosi NOT being re-elected as Speaker in January when Democrats reclaim the House of Representatives.

By Jeremy Kinsman Many times in the past two years, people have told me they’ve never seen Donald Trump laugh. So, what would it take? A sure bet would be if — after the mid-term elections that bore very ominous tidings for President Trump’s hopes for re-election in 2020, because women voters chose Democrats for

Many times in the past two years, people have told me they’ve never seen Donald Trump laugh.

So, what would it take?

A sure bet would be if — after the mid-term elections that bore very ominous tidings for President Trump’s hopes for re-election in 2020, because women voters chose Democrats for House races by a staggering 59% to 40% — new insurgent Democratic members of Congress, seeking generational and ideological change, rebelled against Nancy Pelosi’s re-election as Speaker of the House of Representatives when Democrats take the majority in January.

In the “year of the woman,” is it conceivable that members of her own party would seek to depose a colleague who has held the highest public office ever obtained by a woman in American history? Former President Obama has just observed that Nancy Pelosi “will go down as one of the most effective legislative leaders that this country’s ever seen.”

As Speaker from 2007 to 2011, she never lost a floor vote in Congress, steering — against great odds — the Affordable Care Act through to adoption in 2010 by one vote.

Of course, Fox News, the mouthpiece of the Trump White House, regularly derides her as a “San Francisco liberal Democrat,” with all that implies to the evangelical heartland base about a dangerous crypto-socialist-gay rights agenda.

She is dangerous all right, to the president’s continued free rein. As Speaker and leader of that institution of the US Government that founders like James Madison considered the most important, the “peoples’ House,” she would be the check and balance against Trump’s runaway excess.

And yet, a faction of newly elected members from the left wing of the party believe Nancy Pelosi is too “transactional,” too used to cutting deals with the other party, too much a centrist. They are angry, impatient, and keen to spur the Democrats to use their new majority to attack Donald Trump, to hold hearings to investigate everything about him and his past dealings, to take him on.

Donald Trump would love that. It would mobilize and energize his base like nothing else.

These younger members are passionately progressive, and politically unorthodox, bringing tactics from community organizing into the legislative chamber, as 28-year-old newcomer poster-child Alexandria Ocasio-Ortiz did when, instead of seeking a meeting with her party’s leader, she joined a demonstration against Pelosi outside her office.

They are mainly Bernie Sanders people, who despise the widening income disparities in America, the deference to special interests and lobbyists for corporate America, and especially big finance, big pharma, and big resources for whom Trump is de-regulating as fast as he can.

But who is going to be most effective on behalf of fairness? Trump fears Pelosi. She may be 78, but she is at the top of her political game. She doesn’t engage in dirty politics but the upstarts see her style as old-time transactional politics-as-usual.

They fail to see that in a country where 75% of the electorate self-identifies as “conservative” or “moderate,” a hard-line liberal stance is not an available option. The country is crying out for a Congress that can function. Pelosi wants to give it an honest shot, to see if they can’t agree on infrastructure, the costs of prescription drugs, and making public health work for the patients as well as for the insurance companies, the message they brought to these mid-term elections. They didn’t have to run on a message that Trump is awful for America. They could just leave the daily proof of that to him.

There is a wider point. Polarization is undermining established democracies by putting compromise out of reach. Centrist ex-politicians like Tony Blair believe that it is only through coming to the centre that parties can find the consensus necessary to govern.

It’s a vital lesson for aspiring democrats in countries in need of democratic transitions that have been recently failing. Opponents of dictators can agree on getting rid of the tyrant but can’t agree among themselves on what to do with their power the day after he is toppled and they have to govern effectively, as they were unable to do, for example, in Egypt, or in Ukraine.

Positive passion in politics is precious. It could use reinforcement among professional politicians on the liberal side. They need to mobilize support to face off against the negative and hostile passion Trump’s divisive emotional tribalism generates.

The Mueller Report will probably make the atmosphere more confrontational than ever. Democrats can’t be pushovers, ducking confrontation for the sake of seeking bipartisan agreement, always “going high when they go low,” as Michelle Obama once admirably put it.

But Democrats can be a powerful voice of positive reason without having to leave all their weapons at the legislative door. Nancy Pelosi is the best one they have, the one Trump knows enough to fear. Try to depose her now? This is not the time to make him, at last, laugh.

With great sadness, I am restarting my CIPS blog series with a tribute to Japan's late prime minister Abe Shinzō. He will be missed. https://twitter.com/uOttawaCIPS/status/1546593643112398854

Although Abe Shinzō's legacy is not without controversy, especially in Japan,🇯🇵 he deserves to be remembered as the most visionary statesman of the early 21st century argues @ssimon_chelsea in a great new blog for 🌐CIPS. Read here: https://cips-cepi.ca/2022/07/11/the-legacy-of-abe-shinzo/

Although Abe Shinzō's legacy is not without controversy, especially in Japan,🇯🇵 he deserves to be remembered as the most visionary statesman of the early 21st century argues @ssimon_chelsea in a great new blog for 🌐CIPS. Read here: https://cips-cepi.ca/2022/07/11/the-legacy-of-abe-shinzo/

Join us in one hour!⌛️