A Pioneering War Crimes Tribunal Comes to an End 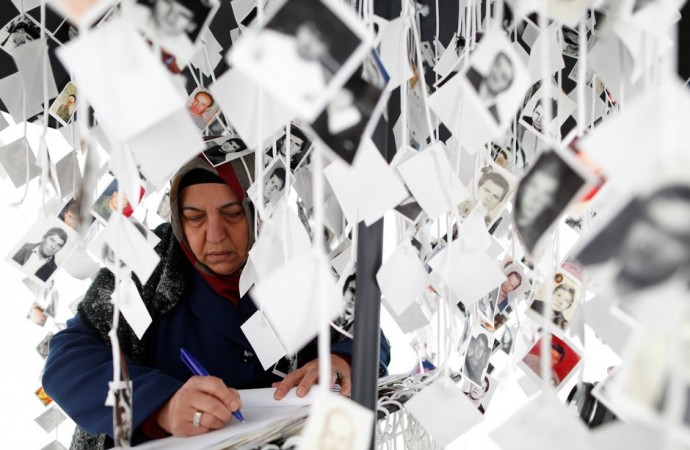 A woman writes in a book inside a travelling monument called “Prijedor 92” outside the Yugoslav War Crimes Tribunal, 22 November 2017.REUTERS/Cris Toala Olivares

At the end of December, the International Criminal Tribunal for the former Yugoslavia (ICTY) closes its doors after 24 years in business. The United Nations court, situated in The Hague, was established in 1993 with the goal of providing accountability for war crimes that took place during the brutal dismemberment of Yugoslavia in the 1990s.

At the end of December, the International Criminal Tribunal for the former Yugoslavia (ICTY) closes its doors after 24 years in business.

The United Nations court, situated in The Hague, was established in 1993 with the goal of providing accountability for war crimes that took place during the brutal dismemberment of Yugoslavia in the 1990s.

Its remaining work, including all outstanding appeals, will now go to the Residual Mechanism for International Tribunals, an institution that also handles the residuals of the International Criminal Tribunal for Rwanda, which closed in 2015. For most outsiders, the image that frames the end of the ICTY is that of a Bosnian Croat commander, Slobodan Praljak, downing a vial of potassium cyanide on live television, moments after appeal judges upheld his 20-year term for war crimes — the court’s “final verdict.” Praljak, a theatre director and television producer before the war, knew how best to turn his suicide into a reality show. What he probably did not appreciate is just how quickly his performance would become B-level material for late-night comedy shows and for meme-hungry social media.

All of this is of course a travesty for anyone sober enough to realize the high stakes of transitional justice, especially that meted out by international courts. In a world where impunity is very much the rule, the last thing anyone needs is more courtroom antics and more war criminal jokes.

A week before Praljak’s surreal stunt, a panel of judges had found the former Bosnian Serb military chief Ratko Mladić guilty of genocide, crimes against humanity and violations of the laws and customs of war — the court’s 84th conviction. This number alone shows just how far the ICTY has come since it was first established.

In its early years, the court did not gain many headlines and was mostly met with eye rolls. By its 10th anniversary, however, cynicism and skepticism slowly began to give way to guarded optimism. The watershed moment was arguably the arrest and extradition of Serbia’s former president, Slobodan Milošević, in 2001, an event that at once reflected and reinforced a period of relative stability and great hopes for a better future in the Yugoslav region. The so-called liberal international order was running strong and the governments in Belgrade, Sarajevo, and Zagreb were co-operating more and more with the ICTY in order to demonstrate good behaviour in front of key power-holders in the Euro-Atlantic area.

In a world where impunity is very much the rule, the last thing anyone needs is more courtroom antics and more war criminal jokes.

ICTY verdicts on big fish perpetrators, on the Srebrenica genocide, on sexual violence, and on the joint Serbo-Croatian enterprise to carve up Bosnia are all sufficiently groundbreaking to establish the court as a pioneering war crimes tribunal — an heir of sorts to Nuremberg and Tokyo. In addition to shaping international legal development, the ICTY inspired the creation of the International Criminal Court (ICC). Today, whenever those beleaguered ICC prosecutors move to indict or investigate someone or something — Sudanese President Omar al-Bashir for Darfur; the role of the Taliban, Kabul government forces, and United States soldiers and spooks in Afghanistan — they first closely consult ICTY work. And if you look at the developments around the Syrian war, you will see two more bodies following in the footsteps of the ICTY: a non-profit, non-governmental Commission for International Justice and Accountability (established in 2012) and a UN General Assembly-sponsored “Mechanism” (created in 2016).

The ICTY has had no shortage of failures. Numerous victims, witnesses, legal experts, and other observers have also expressed profound concerns about the tribunal’s transparency and operating procedures — constant delays, high costs, shameless plea bargaining and low sentences. Note also that Praljak’s was in fact the third suicide that occurred on the ICTY’s watch, and that several high-profile defendants — including Milošević — died while on trial.

The biggest failure in this case is what Georgia State University associate professor Jelena Subotić calls the “hijacking” of justice — the use of ICTY-supplied justice for local political ends. Even when they co-operated with the tribunal, most leaders of ex-Yugoslav states and statelets constantly vilified it for its alleged bias and unfairness — that is, for going hard after “ours” and letting “theirs” off the hook. This game is as despicable as it is popular — just consider the number and stature of the politicians in the region who over the past few weeks have lamented the fate of either Mladić or Praljak — one reason why many think the Yugosphere is now much closer to a “return to the 1990s” than to “reconciliation.”

It is of course a sad commentary on the state of international affairs that millions of human beings victimized in the wars in Afghanistan, Iraq, Libya, Myanmar, Nigeria, Syria, Sudan, Yemen, Zimbabwe, and many other countries in the world would gladly take every one of ICTY’s failures — and then some.

Like every year, this month’s assembly of states that have ratified and acceded the ICC-founding Rome Statute — the annual meeting ends December 14 — will prompt many to say that the ICC is “still” failing in its mandate. Yet, few would argue against the proposition that some justice is better than no justice at all — a proposition borne out by the overall ICTY experience. This should be reason enough for supporting the ICC and the institutions and efforts that complement it.

This article was originally published on 13 December 2017 by OpenCanada.org.

We're excited to announce a two day conference titled "The Arctic Region in an Era of Uncertainty".

Join us on May 25th at 11am EDT! ➡️Why Do Donors’ Approaches to Aid Effectiveness Differ?

This event will feature Simone Dietrich, Drew Smith and Syed Sajjadur Rahman, and be moderated by Stephen Baranyi. @GAC_Corporate

"The problems of GAC are so profound that they defy easy diagnosis" argues Dan Livermore ahead of the new Senate Committee on Foreign Affairs and International Trade review into the department. Read more https://www.cips-cepi.ca/2022/05/13/the-senate-brings-hope-for-gac-reform/