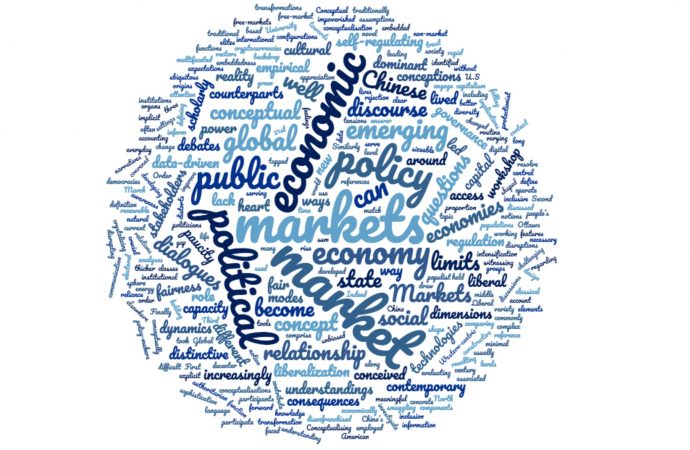 By Pascale Massot and Julian Gruin Markets are ubiquitous in contemporary everyday life and society as well as central features of the global economy. Markets have political, economic, social, and cultural origins, as well as consequences. But in the public sphere, we usually operate with a conceptually impoverished account of what markets are and how

By Pascale Massot and Julian Gruin

Markets are ubiquitous in contemporary everyday life and society as well as central features of the global economy. Markets have political, economic, social, and cultural origins, as well as consequences. But in the public sphere, we usually operate with a conceptually impoverished account of what markets are and how they function. When the concept of market is employed, it is often with an explicit or implicit reference to the minimal classical liberal definition of a self-regulating market.

As markets become increasingly complex and embedded in our lives, how we define them has both scholarly and concrete public policy consequences. In order to investigate these questions, we convened a workshop on the topic of “Conceptualising markets” at the University of Ottawa on 25–26 March 2019 to discuss the lack of attention devoted to the concept of “the market” in scholarly and public discourse, and to identify public policy implications and ways forward. Markets are actually at the heart of three of the most crucial vectors of transformation of the 21st century.

First, the rise of novel modes of governance, such as China’s authoritarian capitalism, is challenging commonly held assumptions about what markets are and their relationship with other traditionally conceived non-market stakeholders, such as state organs. It has become increasingly clear that different understandings of markets and the functions they serve are crystalizing between North American and Chinese stakeholders. Conceptual sophistication regarding markets has become necessary in the context of policy dialogues with Chinese counterparts about such issues as liberalization, fair access, or the role of the state in the economy.

Second, new information and communication technologies are disrupting traditional elements of markets, such as who can participate in them and how they can do so. For policy-makers faced with these rapid transformations, it is difficult to resolve questions around the regulation of markets emerging from the data-driven economy without a multifaceted understanding of market components, market design, market fairness, and public expectations.

Third, conceptions of markets are at the heart of the relationship between economic inclusion, protectionist political narratives, and associated electoral dynamics. In liberal democracies, the emerging gap between the dominant economic discourse, based on “free-markets,” and people’s lived reality has arguably led to falling trust levels in political and economic elites and global economic institutions.

In the US and elsewhere, the long reliance on “free-market” language and routine references to “markets as self-regulating and unbiased,” which actually does not match many day-to-day experiences, has led to a rejection of the dominant economic policy discourse. Indeed, populist politicians around the world have tapped into feelings that political and economic modes of governance are not serving the working and middle classes. We are witnessing the intensification of tensions between those holding different political conceptions of what markets are, and what they can be used for.

In sum, a lack of appreciation for the many institutional, power, and social dimensions of markets at the global level distorts contemporary debates on China and the Global Liberal Order. Similarly, conceptual limitations hinder our capacity to contribute to current debates about the regulation of new markets resulting from disruptions in the data-driven economy. Finally, a lack of knowledge about varying understandings of markets also limits our capacity to improve inclusive economic policy and to engage in constructive dialogue with economically disenfranchised groups.

Against this backdrop, workshop participants discussed better conceptualisations of markets from a variety of empirical settings, including renewable energy, capital markets, international smuggling, natural capital accounting, and the digital economy. These discussions took us some way towards better defining, evaluating, and comparing markets along meaningful dimensions, as well as developing tools to answer distinctive questions about global markets, such as these:

Pondering these questions from a variety of perspectives was the highlight of our workshop, and we are pleased to share some of our discussions in this series of blogs.

Pascale Massot is an Assistant Professor in the School of Political Studies at the University of Ottawa.

Julian Gruin is an Assistant Professor of Transnational Governance at the University of Amsterdam.

This article is part of a four-blog series that follows from a workshop on “Conceptualising Markets,” funded by the University of Ottawa’s Office of the VP Research, the Centre for International Policy Studies, the School of Political Studies, the CN–Paul Tellier Chair in Business and Public Policy, the Centre on Governance, the International Political Economy Network, and the Institute for Science, Society and Policy. For other blogs in this series, click here:

—“Is the Sky the Limit? Risk, Uncertainty, and Nature” by Sylvain Maechler

—“What Makes a Market Economy?” by Alice Chessé