Disability and Development in Africa: What Role for Canada? (Anglais seulement) 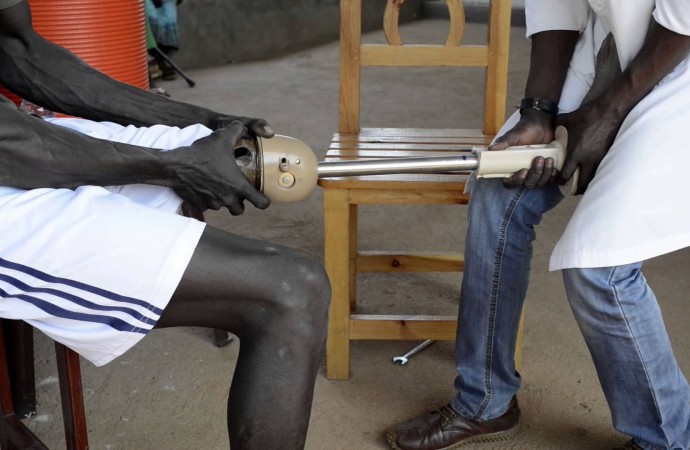 Conflicts in South Sudan have left many people injured for life. Here in a physical rehabilitation centre, a worker helps a man with his prosthetic leg.

by David Black It has become widely accepted that the previous Conservative government sharply diminished Canada’s focus on Sub-Saharan Africa (SSA). Against this backdrop, the new Liberal government has signalled its intent to re-engage. There are several problems with this narrative. First, while there is no denying the Conservatives’ relative disinterest in African issues, it

It has become widely accepted that the previous Conservative government sharply diminished Canada’s focus on Sub-Saharan Africa (SSA). Against this backdrop, the new Liberal government has signalled its intent to re-engage.

There are several problems with this narrative. First, while there is no denying the Conservatives’ relative disinterest in African issues, it overstates the degree to which the Harper government pulled back from the continent. Aid expenditures, for example, continued to be primarily concentrated in SSA. Particularly during its final (majority) term in office, two of its most prominent foreign policy priorities — support for the Canadian extractive sector and the drive to improve maternal, newborn, and child health outcomes — were heavily focused in Africa.

Second, the dominant narrative overstates the degree to which earlier Canadian governments were closely concerned with the continent. True, some of this country’s more prominent international engagements focused in and on SSA, for good and ill. On the positive side of the ledger, Canada’s active role in supporting pressure for change in apartheid South Africa, and Jean Chrétien’s sustained effort to entrench African issues on the G8 agenda are frequently cited. On the negative side, the trauma of Somalia and the human and environmental insecurity linked to major Canadian extractive investments are widely noted. Overall, however, Canadian involvement in SSA has been shallow, inconsistent, and incoherent (that is, lacking in overall strategic vision).

This makes any effort to re-engage challenging. It is made more so by the fact that, during the previous decade of relative inattention under the Conservatives, the rest of the world was beating a path to “Rising Africa.” The exponential growth of Chinese involvement received most attention, but many other external partners have taken concerted steps to increase their African footprint, including Brazil, India, South Korea, Turkey, and Russia. The sustainability of Africa’s latest “rise” has now been brought into question, in part by the recent commodities rout, but the African diplomatic, developmental, commercial, and security landscape has become much more crowded, and this is not changing.

How, then, can a Canada that seeks renewed relevance in SSA find ways to re-engage, both usefully and visibly? Identifying critical issues where Canada can “make a difference” — by building expertise, capacity, relationships, and reputation — must be a crucial step. A focus on the rights and conditions of people with disabilities is a compelling option, for several reasons.

First, the need is great. Illuminated by the insights of “intersectional” analysis, it is clear that people with disabilities are over-represented among other marginalized groups, in Africa as elsewhere. For example, people with disabilities (and their families) are over-represented among the extreme poor, the unemployed, and the un- or under-educated. Similarly, women and sexual minorities with disabilities are doubly disadvantaged. Since the challenges of sustainable poverty alleviation and social equity are still most acute in Africa, it makes sense that a focus on disability will tackle these challenges where they are most pressing. Moreover, while a handful of donor agencies have carved out leadership roles on disability (see Stienstra and Estey in this blog series), relatively few have developed these specialized capacities to date.

Second, a focus on disabilities is consistent with Canada’s multilateral obligations, old and new. Not only is it consistent with Canada’s obligations under the UN Convention on the Rights of Persons with Disabilities (UNCRPD), but it would be an important step towards meeting our new commitment to the Sustainable Development Goals (SDGs) adopted in September 2015. Unlike the Millennium Development Goals (MDGs), the SDGs explicitly acknowledge the particular challenges faced by persons with disabilities. Moreover, given the disproportionately disadvantaged situation of the disabled, it is impossible to address the global goals as a whole (e.g., the objective of ending poverty and hunger, or ensuring inclusive and equitable quality education for all) without paying particular attention to people with disabilities.

Third, processes are afoot in SSA that make a focus on disability particularly timely, allowing the results to be effectively leveraged. One of the core lessons of disability rights activism is the vital importance of self-representation and leadership by disabled peoples’ organizations (DPOs) in successfully promoting the rights and inclusion of persons with disabilities and their families in mainstream society. DPOs are relatively marginal in many African societies, and would therefore benefit greatly from capacity-building efforts. New initiatives are underway to which Canada could make a vital contribution.

A particularly noteworthy example is the African Disability Forum (ADF), launched in November 2014. This representative, inclusive, democratic, Pan-African organization of some 50 continental, sub-regional, and national DPO federations aims to amplify the voice of Africans with disabilities and build the capacity of their organizations. ADF also seeks to engage systematically with the African Union’s Disability Architecture, ensure that important continental development initiatives include persons with disabilities, and support research and data gathering on disability in Africa, among other key roles.

A relatively small and sustained investment of resources from the Canadian government (similar to the investments made in Disabled Peoples’ International by Canada after its founding in 1981) could make a vital contribution to building momentum for this and similar initiatives. It would also educate Canadian state and non-state policy makers about the needs and priorities of the estimated 180 Million persons with disabilities in Africa.

David Black is the Lester B. Pearson Professor of International Development Studies and a Professor of Political Science, Dalhousie University.

We're excited to announce a two day conference titled "The Arctic Region in an Era of Uncertainty".

Join us on May 25th at 11am EDT! ➡️Why Do Donors’ Approaches to Aid Effectiveness Differ?

This event will feature Simone Dietrich, Drew Smith and Syed Sajjadur Rahman, and be moderated by Stephen Baranyi. @GAC_Corporate

"The problems of GAC are so profound that they defy easy diagnosis" argues Dan Livermore ahead of the new Senate Committee on Foreign Affairs and International Trade review into the department. Read more https://www.cips-cepi.ca/2022/05/13/the-senate-brings-hope-for-gac-reform/